Can Alabama stay undefeated? Who will emerge as contenders for the College Football Playoff? Week 11 in college football answers these questions and much more.
USA TODAY 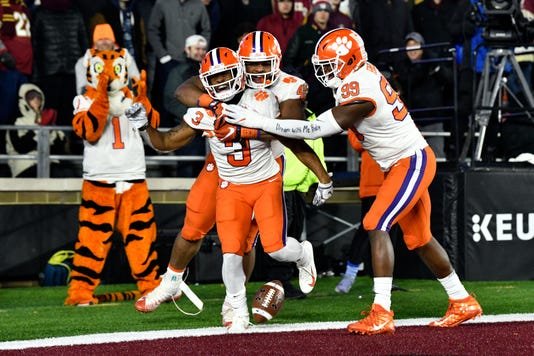 On and on we could go, because all the contenders did. Not much changed. But of course we took a very clean sheet into our board room, anyway, and ranked them all this week as if there had been no previous rankings.

As always, remember we pick the bracket as if the season was over.*

1. Alabama – Another shutout, but the Crimson Tide was slowed significantly by Mississippi State’s defense. And Tua Tagovailoa’s limp from that creaky knee is becoming a real concern.

2. Clemson – The Tigers’ defense pushed them to a road win against Boston College – and might push them all the way into the playoff.

3. Notre Dame – Things went so well against Florida State, even without Ian Book, that Brian Kelly was joking with reporters about a quarterback controversy. Up next: Syracuse, one of the final remaining obstacles on a bid to go undefeated.

4. Michigan – Zero trouble – OK, there was that 80-yard TD run – with Rutgers. Next up, Indiana. But it’s probably safe to fast-forward the Wolverines to Columbus, Ohio, for The Game.

5. Georgia – A physical run game has emerged, and the Bulldogs beat Auburn at home. Can they beat Alabama? Well, probably not. But they’ll get their shot – and the running game might provide a fighting chance.

6. Oklahoma – A Bedlam escape revealed more of what we already knew: The offense is nearly unstoppable, which is important because the defense is not stopping anybody.

7. West Virginia – Rolled over TCU. If the Mountaineers can get past Oklahoma State in Stillwater, it sets up a showdown (first of two?) with Oklahoma.

8. Washington State – Easy win at Colorado. The Cougars keep rolling. Gardner Minshew’s mustache is trending. Could he make it to New York for the Heisman ceremony?

Ohio State – Just win, Buckeyes, and then see what happens against Michigan in a couple of weeks.

UCF – Another week, another win for the Knights – 22 in a row now, and counting. Next up, Cincinnati.

Syracuse – Four consecutive wins now after a rout of Louisville, and now comes a shot to knock Notre Dame from unbeaten (and maybe from the playoff?).

LSU – Rebounded from the loss to Alabama by outlasting Arkansas. The Tigers notched their eighth win, and while they’re not as good as that other committee seems to think, they’re still on track for a New Year’s Six bowl.

Utah State – Lost a tough one at Michigan State to start the season – and has basically rolled every opponent since.

Louisville – Taking up regular position in the Futile Four, the Cardinals keep getting blown out. The only move left was made Sunday morning, when Bobby Petrino was ousted. Let the Jeff Brohm Watch begin.

Colorado – A 31-7 home loss to Washington State was the Buffs’ fifth consecutive. That 5-0 start seems like a long time ago. Can they make it to a bowl game? Is Mike MacIntyre’s seat warming?

North Carolina State – Blew a 10-point lead in the fourth quarter against Wake Forest, really? Yes. It’s been hard to figure if this talented Wolfpack team is good or not. We’ll go with not.

Arkansas – Not that anyone expected the Razorbacks to upset LSU, but when running back Rakeem Boyd and receiver Jordan Jones collided in the backfield – self-tackle-ization, y’all – it seemed like a fitting picture of a difficult season. The Hogs managed only 216 total yards, a season low.

* The season is not over.

** Don’t be worried that your team sits just outside the cut. This is a weekly snapshot. And what do we know, anyway?

*** See the previous note, but it’s OK to be slightly concerned or very angry. But what do we know, anyway?