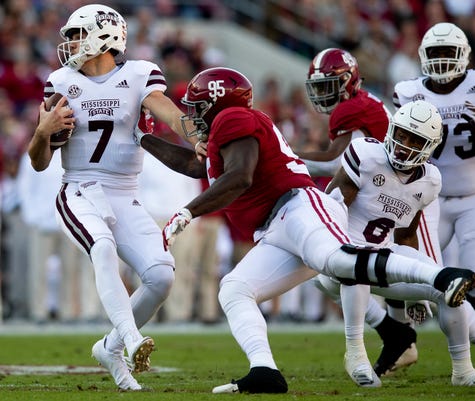 TUSACLOOSA, Ala. – Everything has to go the visiting team’s way to avoid a loss in Tuscaloosa during the Nick Saban era at Alabama.

No. 15 Mississippi State couldn’t catch a break in its 24-0 loss to the No. 1 Crimson Tide on Saturday at Bryant Denny Stadium. Some of the wounds were self-inflicted. Others were downright unlucky.

As is often the case in T-Town, the madness started on Bama’s first possession of the game. Running back Damien Harris fumbled on the third play from scrimmage, and Mississippi State clearly recovered.

The Dogs’ defense jumped up and celebrated, but the officials grabbed the ball and spotted it as a gain of four. The Tide retained the ball without an official review. Minutes later the scoreboard read Alabama 7, Mississippi State 0.

“I considered challenging it, but the information I got from guys up in the booth who saw it and had a great view of it said that the guy was down and it wasn’t going to be overturned,” Moorhead said.

The Tide made it 14-0 later in the first quarter after a 13-play, 83-yard scoring drive. There was another potential fumble from tight end Irv Smith Jr., but the officials blew the play dead.

In the second quarter, Alabama gifted Mississippi State a fumble on a botched handoff. The Bulldogs recovered. That one stood. Moorhead tried to take advantage with a flea flicker on second down, but senior quarterback Nick Fitzgerald didn’t let it fly and took a lengthy sack.

The Dogs’ defense went back to work, sacking Alabama quarterback Tua Tagovailoa to force a three-and-out. Keeping with the theme of the previous possession, Mississippi State misfired on capitalizing on the opportunity. Junior Deddrick Thomas fumbled the punt, and Alabama recovered. The Tide made it 21-0 three plays later.

Sophomore running back Kylin Hill broke off a 38-yard run to get State in scoring position for the first time on the Bulldogs’ last possession of the half. Then a mixture of self-harm and questionable officiating took place.

Hill appeared to score after catching the ball in the flat and racing to the pylon. Thomas was called for a block in the back on what could be described as a “phantom call” – Thomas didn’t do much of anything but throw his hands into the air to avoid contact with the defender.

So on second and long, Fitzgerald threw an incomplete pass into coverage. He had senior running back Aeris Williams wide open in the end zone but didn’t see him. Then Fitz found senior tight end Justin Johnson for what appeared to be a touchdown. Not to be – MSU was flagged for delay of game before the snap.

Fitzgerald was sacked on the actual third-down play, and sophomore Jace Christmann missed a field goal attempt as time expired in the half. The Bulldogs trotted into the locker room down 21-0 in a game that should have been much closer.

“We’re not going to beat anybody by scoring zero points,” Moorhead said. “We certainly had some opportunities throughout the game but too many miscues.”

As many missed opportunities as Mississippi State had, though, the Bulldogs simply weren’t going to score in the 20’s even if everything went their way. Once again, Moorhead’s offense was abysmal at times on the road.

Mississippi State averaged fewer than 2.0 yards per carry. Fitzgerald had negative yardage on the ground as a result of five Crimson Tide sacks. The Bulldogs gained a season-low 169 yards on the day.

“When you’re not running it well and you’re not moving it in the air and you’re not creating explosive plays against a defense like this, you give yourself a hard time to win,” Moorhead said.

Every time the Bulldogs got a defensive stop or the Alabama offensive machine inexplicably malfunctioned, the Mississippi State offense failed to take advantage – very reminiscent of all three of State’s other losses this season.

The Bulldog defense managed to sack Tagovailoa four times and held him under 200 yards passing on 21 attempts. Sophomore linebacker Willie Gay Jr. intercepted Tagovailoa as well. None of the defense’s success was rewarded by the players on the other side of the ball, though – a fair summary of State’s season.

2: Consecutive shutouts for Alabama for the first time since consecutive 49-0 wins over Western Carolina and Auburn on Nov. 17 and Nov. 24, 2012. The Alabama defense has not allowed an offensive score in its previous 152 minutes and 18 seconds of play, dating back to a second quarter Tennessee touchdown pass on Oct. 20.

4: Sacks for Mississippi State against an Alabama offensive line that had allowed six sacks in its first 10 games.

9: Tackles for State linebacker Willie Gay Jr., a career-high. He also had a career-best two sacks.

9: Interceptions by MSU in 10 games, with Gay Hr. getting one on Saturday.

72: Points scored by Alabama this season (including a second-quarter TD Saturday) off opponent turnovers.