Alabama reloads in the trenches during early signing period 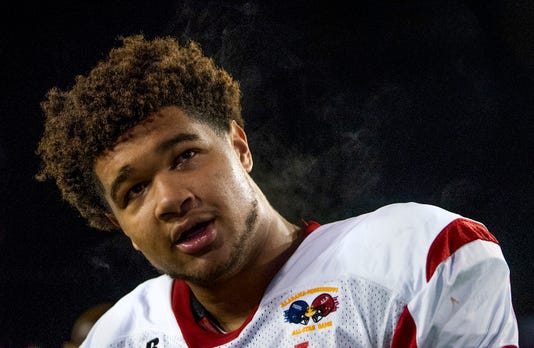 TUSCALOOSA — Amari Kight is just ready to get to campus and get started.

“Being able to learn from all those guys and being able to come in and compete is just great,” Kight said Monday night from the Alabama-Mississippi All-Star Game at Cramton Bowl.

The four-star Thompson left tackle and blindside blocker to right-handed fellow signee Taulia Tagovailoa, the 6-foot-7, 315-pounder from Alabaster is among five offensive linemen in the Crimson Tide’s 2019 signing class to ink with Alabama during the three-day early signing period Wednesday.

With a focus on replenishing its ever-dwindling depth in the trenches in this year’s recruiting class, nearly half of the Tide’s 23-member group was dedicated to reloading along both the offensive and defensive lines, including six defensive linemen and a quintet of offensive linemen.

Joining Kight and Neal was four-star early enrollee Pierce Quick of Hewitt-Trussville, who is already participating in Alabama’s bowl practices ahead of its Orange Bowl national semifinal matchup with No. 4 Oklahoma on Dec. 29 in Miami.

“Well we’re going to lose quite a bit, I think, so it was important to have a good class in that area as well,” Saban said Wednesday. “And I think we were able to do that. We never know for sure right now exactly — (especially with) guys going out early for the draft — … (so) we never know for sure exactly what we need because of that and that can have a significant impact on how your team (looks) next year. And it seems like every year more and more guys are going out early for the draft.”

Along with its two seniors – center Ross Pierschbacher and on-again, off-again starting guard Lester Cotton — Alabama is likely to lose three-year starting tackle Jonah Williams, a junior who is widely viewed as the top offensive tackle prospect in next April’s NFL draft.

Alabama signed five offensive linemen during the early signing period, including three top-50 overall players according to the ESPN 300, with Quick ranking second in the nation among all offensive tackles and Neal and Kight were at eight and nine, respectively. 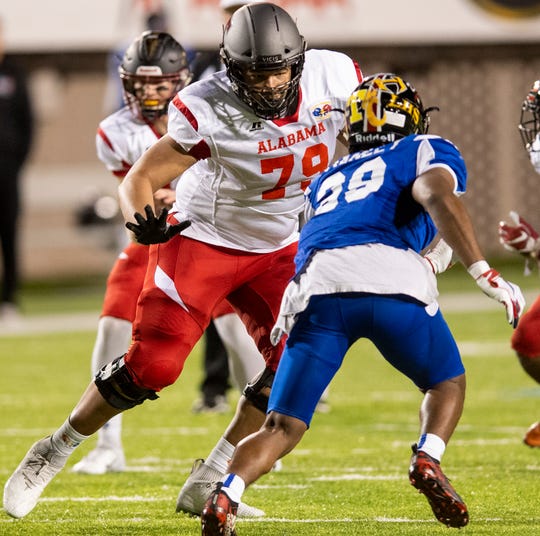 Quick is rated as the fourth-best player in the class overall, according to the ESPN 300, while Neal (36th) and Kight (46th) round out the top-50 rankings. Add to that a pair of four-star guards in Tanner Bowles and Darrian Dalcourt — ranked No. 17 and 18 nationally according to 247Sports’ composite rankings, and Alabama has a solid foundation for the future.

Of course, the Crimson Tide already have a strong core highlighted by a pair of first-year starting sophomores in right tackle Jedrick Wills Jr. and right guard Alex Leatherwood, a former five-star offensive tackle who could be the early front-runner to replace Williams at left tackle next season.

That said, the 360-pound Neal made it clear during his signing day announcement on ESPNU that he isn’t going to make it easy, adding the Alabama coaches view him as a natural left tackle and will give him every opportunity to win the starting job this offseason.

And there will be plenty of competition along the Crimson Tide offensive line this offseason, especially with former starting right tackle Matt Womack and redshirt sophomore Deonte Brown believed to be the likely front-runners at guard, depending on whether Leatherwood can make it work at tackle.

On the other side of the line, Alabama could feasibly see even greater turnover with the potential to lose all three starting defensive linemen to the NFL this offseason. Redshirt sophomore nose guard Quinnen Williams has climbed to the top of most draft boards with an impressive first year as a starter, and is considered a likely top-five overall pick, while physically imposing junior defensive end Raekwon Davis is as a potential second-day selection, along with senior end Isaiah Buggs.

Expecting some of these moves, Saban acknowledged signing players able to play along the defensive front seven was vital in this year’s class.

Along with the five-star Alfano, Alabama received signatures from a quartet of four-star pass rushers, including Georgia products Justin Eboigbe, King Mwikuta and Kevin Harris, who’s likely to move to outside linebacker once he arrives in Tuscaloosa, and 260-pound South Florida product Braylen Ingraham of football factory St. Thomas Aquinas. Add to that four-star defensive tackle D.J. Dale, an early enrollee from Clay-Chalkville, and the Tide feel a lot better about their depth up front.

“It was a very high priority at all and it’s going to continue to be a priority as we continue to recruit,” Saban said. “But we lost a lot of players in the last two years. We probably haven’t replaced them as quickly as we lost them. So now we’re trying to — and I think a lot of these players see the opportunity they have because of that. That was very important.” 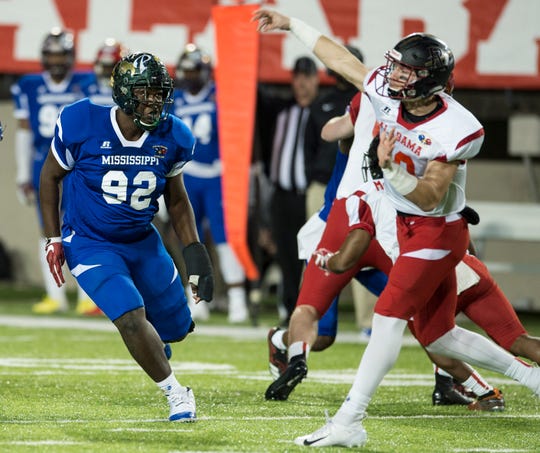 And as Saban made clear during his opening statement Wednesday, Alabama isn’t done, with the Tide still in the running for several top-rated linemen of either side of the ball. Among those is committed four-star defensive end Byron Young of Mississippi, who is confident he can contribute early in his college career.

“I think I can come in and play right away, because I know they’re losing a lot of defensive lineman,” Young said last week following the Alabama-Mississippi All-Star Game in Montgomery. “So I feel like I could come in right away and if I put in all the work in I’ve got to put in, I feel like I can play next year.”