Are you serious? Alabama scores two touchdowns on first three plays against Arkansas

A link has been sent to your friend’s email address.

A link has been posted to your Facebook feed. 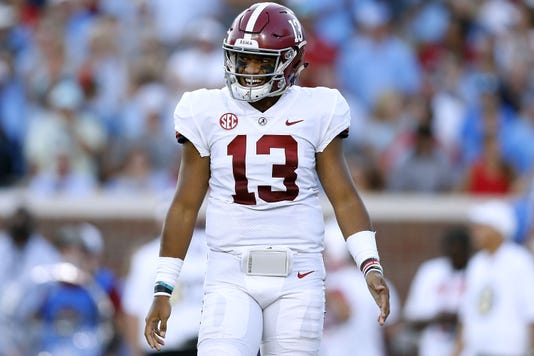 Tua Tagovailoa of the Alabama Crimson Tide celebrates during the first half against the Mississippi Rebels at Vaught-Hemingway Stadium on September 15, 2018 in Oxford, Mississippi.(Photo: Jonathan Bachman, Getty Images)

It didn’t take Alabama very long to get on the board during Saturday’s matchup with Arkansas.

And by that, we mean — they scored on the first play of the game.

Heisman frontrunner Tua Tagovailoa connected with tight end Irv Smith Jr. on a 76-yard strike to put the No. 1-ranked Crimson Tide up 7-0 after just 21 ticks.

Tagovailoa, who entered the game with 14 touchdown passes on the year, dumped it off to Smith after a play-action and Smith followed his blockers down the sideline for the score.

But ‘Bama was just getting started.

On the second play of the next possession, Tagovailoa completed another pass to Smith, who ran 47 yards down the field before fumbling. The fumble, of course, was recovered by Alabama’s Henry Ruggs III and returned 12 yards for the score.

Tua ➡️ Irv = END ZONE!@AlabamaFTBL has scored a TD on its opening drive in all 6 games this season pic.twitter.com/TLdIRDNBkH

Alabama is just making up new ways to score for fun. pic.twitter.com/Ji5WEIjin0

Fourteen to nothing after three offensive plays? Yeah, Alabama is still really, really good at football.