As Thanksgiving approaches, Alabama Crimson Tide OT Jonah Williams is cooking — on the field and in the kitchen

Jonah Williams is squished next to teammate Ross Pierschbacher on a couch meant for three. Together, the Alabama linemen are tackling a Thanksgiving feast meant for six.

“Did you know Joe Thomas has his own beer?” Williams asks between bites of sweet potato casserole, his own recipe. Pierschbacher’s mouth is too full of mac and cheese to respond, so he just nods.

Thomas is a hero to both players — part athlete, part regular guy. Williams picked his No. 73 in honor of the 10-time Pro Bowler, and after Alabama’s victory over Clemson in last year’s Sugar Bowl, Thomas followed Pierschbacher on Twitter. Williams is still salty he didn’t get a follow, too.

Williams could be the next Joe Thomas. He’s big — 6-foot-5, 300 pounds — and quick and is largely considered the top left tackle in the country, blocking for the best quarterback in the country, on a team that might be, again, the best in the country.

But also like Thomas, who famously skipped the NFL draft to go fishing, football doesn’t define Williams. The 20-year-old isn’t brewing beer — yet­ — but he can cook up a perfectly seasoned rack of lamb that would pair nicely with Thomas’ 73 Kolsch.

“I’m not an Italian grandma,” Williams says of his culinary-expertise level, “but if something looks good, I’ll try [cooking] it.”

There’s a crossover here. It’s all about the chemistry, about getting every ingredient just right. If one part is off, on an O-line or in a dry-rubbed rack of ribs, the final product falls apart.

“That,” Pierschbacher says, “is why we make the best cooks.”

Williams has cooked dinner for a Pierschbacher date night, and Pierschbacher’s girlfriend then pushed for Williams’ recipes. A few days before their turkey dinner, they had gnocchi. “He thought it was from Japan,” Williams chides. He’ll sous vide buffalo wings that would make an Upstate New Yorker drool.

On the field or in the kitchen, Williams has his technique down. He’s become college’s top left tackle, and maybe its best amateur chef, by following this recipe for success:

1. Start with the right ingredients

When Williams, a 240-pound two-way lineman in high school, started getting scholarship offers as an offensive tackle, he knew he had to bulk up.

That’s how The Shake was born. The main ingredient: protein powder — lots of it.

“The scoop for the powder was that big,” he says, holding his hands 8 inches apart. “Like, it came with a shovel.”

“I had that every night before bed,” Williams says. “My stomach would be upset, but I’d sleep and then wake up feeling normal.”

There had to be a healthier way, he figured. So he started searching for recipes that were both nourishing and satisfying.

“I know there’s a trope that linemen love to eat, but when you’re force-feeding yourself 6,000 calories a day,” he says, “you start asking, ‘How can I make this food good?’ ”

Eating well was tough in Williams’ first year, when he lived in a campus dorm without a kitchen. Food often came from the dining hall or a deli, and some nights, as Pierschbacher remembers, he’d down a pound of Publix chicken fingers and a pound of potato wedges with a jug of milk. Williams tried to stuff himself, but he still managed to lose 20 pounds his freshman year.

When he finally moved into his own place with a “humble but effective” kitchen, Williams gleefully adorned it with accessories: a cast-iron skillet (the staple of any good Southern chef’s toolbox), pots and pans, a fancy immersion circulator to sous-vide meat.

“[He had] a childlike joy” about cooking, says Alabama nutritionist Amy Bragg. Williams sought her advice, watched hours of Instagram and YouTube videos, read cookbooks and peppered chefs at Bama’s dining facility with questions in exchange for insights on players’ appetites.

The staff used to cook each steak medium-well, but Williams wanted his rare — “Just kiss the grill,” Pierschbacher says — so they started grilling every steak to order.

Meanwhile, Williams had been toying with a lamb burger. It always came out too dry. But he loved the Mediterranean flavors and wanted to get it just right, so he went to Murray for an answer.

The solution, as it is for so many things, was bacon.

“It turned out so juicy,” Williams said. “That was the biggest moment for me. I was thinking, I’ve accumulated so much random information … and that was the first complex dish I made that turned out really good.

“Block this long enough for me,” quarterback Tua Tagovailoa told his linemen in a first-quarter huddle against Tennessee, “and we’re going to score.”

Sure enough, the Heisman front-runner took the snap, the line held, and 77 yards later, receiver Jaylen Waddle was in the end zone. Big passing plays are new for the Tide.

“We used to have to grind people to score and break their will,” Pierschbacher says. “Now we fling it down the field and it’s like, ‘Oh, that was easier.’ ”

With Tagovailoa doing so much to make their lives easier, the linemen figure they should pay him back in kind. And, of course, that means with food.

Tagovailoa insists this isn’t necessary. Heck, he’d like to take the line out for a meal, not the other way around. For Williams, though, meal planning is the fun part.

He envisions a day “just to celebrate Tua” and his Samoan and Hawaiian heritage. He and Pierschbacher have tried musubi, a Hawaiian snack made of Spam, but they want to do more, call Tagovailoa’s mom, get some family recipes.

Why stop there? Williams wants a full-blown luau; he could fix Hawaiian and Samoan fare, maybe roast a pig on a spit. Pierschbacher suggests that Williams try some traditional dances with Tagovailoa.

Williams doesn’t hesitate: “I’ll do it.”

Williams considers one calculation before each grocery run: the cost-to-calorie ratio. In another life, maybe he just buys what tastes good or what interests him, but this is Alabama, and he’s a left tackle. That means he’s got a hefty calorie requirement and a college kid’s budget. The answer is usually the same: steak.

He eats probably four or five steaks a week and used to cook them on the grill. Now he likes to pan sear them with clarified butter to get the outside crispy but keep the center rare. The frequency means he’s on the lookout for a reliable butcher.

The search hit a snag a few months back, though. Williams was planning to splurge on a couple of 2-inch ribeyes with linemate Josh Casher. But Casher is a born negotiator, and he wasn’t just going to open his wallet and hand over a stack of cash for (by lineman standards) a bit of beef. There was a deal to be made.

“It was a reasonable price,” Williams remembers, “but he’s like, ‘Is this the best you can do?'”

Williams was horrified. You don’t negotiate at a grocery store. It’s just not done. And these were huge steaks, maybe 3 pounds. But the cashier talked to the butcher, and the butcher countered with Casher, and Casher threatened to head down the road to Fresh Market. In the end, the linemen left with a nice discount, even if Williams is now too embarrassed to return for more.

There’s something unfulfilling about creating a masterpiece, only to devour it minutes later by yourself — the proverbial tree falling in the forest. That’s how the Instagram feed began.

Turns out, photographing food is nearly as tough as cooking it. Plating and presentation need to be perfect. Screw up the aesthetics and the dish is unappetizing before anyone even tastes it.

“But it makes cooking more fun when you know there’s a little pressure,” Williams says. “It starts to look bad or taste bad, and you can’t just throw it away.”

So he purchased new plates. He got a photography light — critical for a good food shot. His dad bought him a rustic wooden coffee table. It’s a ministudio, alongside his humble kitchen, inside an apartment made for one. And it works.

“The food looks great,” Tagovailoa says. “It just doesn’t look like portions sized for a lineman.”

Williams’ ankle was throbbing. He was fuming. He’d just finished a spring scrimmage, and he hadn’t played well.

So he bought a rack of lamb. He’d never cooked a full rack before, but he craved the challenge as much as the meat. “It was like I was treating myself.” 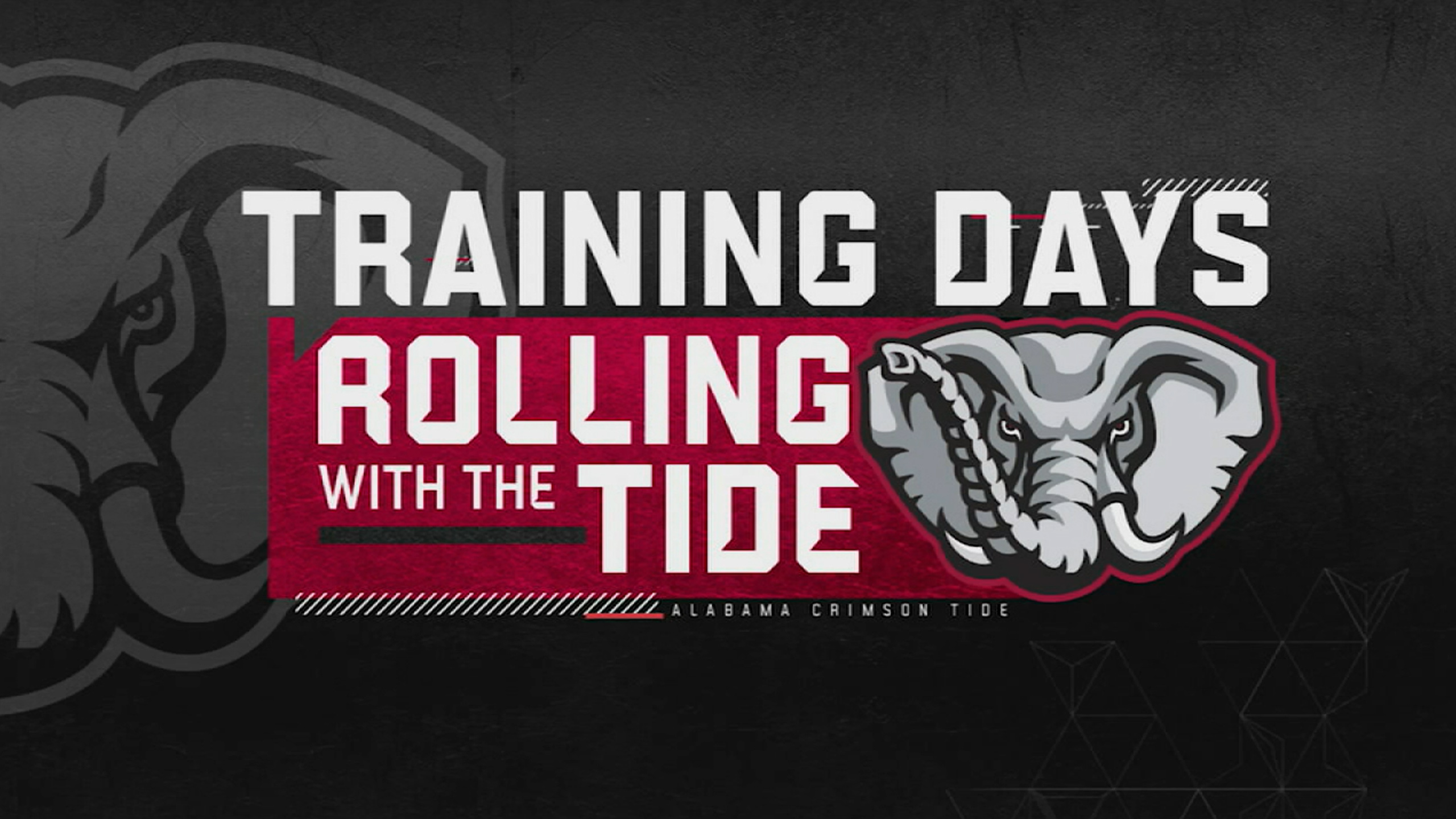 Go inside practices and closed door meetings with coaches and players as they prepare to defend their CFP national championship. Watch on ESPN+

It’s pretty tough to cook a rack of lamb (“You’d know that if you watched ‘Master Chef,'” he tells Pierschbacher), but he found a method he could manage. He put together his own rub, a mix of bread crumbs and parsley and garlic. It turned out beautifully. On a day of utter failure, this was a victory.

“I have a lot of friends, but I’m very focused in my life,” Williams says. “Cooking’s a fun event for me to do on a Friday night.”

There are next steps to this adventure, but Williams is always battling to find more of his scarcest ingredients — time and cash and calories. He wants to work more with seafood, but the $30 he’d shell out for scallops doesn’t match his dollar-to-calorie ratio requirements these days. Maybe when the season’s over, there will be sea bass and octopus and other new frontiers in the kitchen.

For now, Williams and Pierschbacher are leading a dining advisory committee to refine the team’s menu. The Tide players are not foodies. They’re as happy at Chipotle as they’d be at a Michelin-star restaurant, but they trust Williams enough to try something new.

“Jonah’s just an overachiever,” Bragg says. “Because of who he is, how he carries himself, he’s influential. They’re more adventurous eaters because of Jonah. And that’s abnormal.”

And even further down the road, who knows? Williams said he’d be interested in culinary school, and even if he never cooks professionally, it’s something he’ll always do for fun.

“He’s far and away better than any home cook I’ve ever seen,” Murray says. “I’d have him [in the kitchen] if I could.”

For now, Williams likes being at home, where his kitchen is suited to a single cook, his couch fits a single lineman comfortably, and his PlayStation has just one controller. It’s his sanctuary, his place to unwind, his place to cook.

“Some people go out. Some people play video games,” Williams says. “For me, it’s cooking.”