SportsPulse: College football insiders Paul Myerberg and Dan Wolken discuss what the committee got right and wrong in the second playoff reveal of the season.
USA TODAY 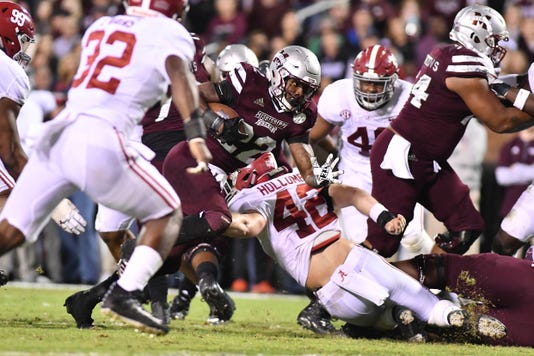 Mississippi State running back Aeris Williams carries for a touchdown against Alabama during their game in 2017.(Photo: Matt Bush, USA TODAY Sports)

As Week 11 of the college football schedule arrives, we’re now to the point where only something truly unexpected will alter the playoff picture. While this sport’s history is littered with chaotic events, the proverbial apple cart appears reasonably stable for the primary candidates.

Bearing all that in mind, here are the top five games that at least have the potential to affect the College Football Playoff race.

The ACC Atlantic isn’t a fait accompli just yet, despite the dominant performances the Tigers have been turning in of late. They’ll look to seal the deal this weekend against the Eagles, who have a shot at the division title themselves. Even if BC can pull off this upset, however, it must still negotiate the rest of a tough November slate that ends with a date with Syracuse.

Clemson has been rounding into championship form, with freshman QB Trevor Lawrence turning most of the heavy lifting over to game-breaking RBs Travis Etienne and Tavien Feaster. The BC ground defense, anchored by LB Connor Strachan, might make Lawrence stretch the field a bit more. BC needs a big game from RB AJ Dillon to keep the Tigers’ superb defensive front from teeing off on QB Anthony Brown, but not many O-lines have managed to keep Clemson defensive linemen Des Clelin Ferrell and Austin Bryant out of the backfield consistently.

No. 7 Ohio State at Michigan State

A path to the College Football Playoff still exists for the Buckeyes, who will get to host archrival Michigan at the end of the month with a spot in the Big Ten title game likely on the line. But the Buckeyes haven’t looked the part of a playoff team in recent weeks, following a blowout loss at Purdue with a narrow win against struggling Nebraska. The Spartans aren’t flashy, but they’re still plenty dangerous, as recent victories against Penn State and that same Purdue squad prove.

The Ohio State offense remains quite formidable, with QB Dwayne Haskins able to distribute the ball among an impressive array of big-play threats like RB J.K. Dobbins and WR Parris Campbell. But Michigan State’s defense, stingiest in the nation against the run thanks in large part to LBs Joe Bachie and Andrew Dowell, could help the Spartans keep the game within reach. Spartans QB Brian Lewerke will need to be more efficient than his season-long 56% completion average, and he must not add to his total of eight interceptions. Buckeyes CB Kendall Sheffield will try to make sure he does.

Oklahoma State at No. 6 Oklahoma

The annual Bedlam showdown finds the Sooners in a familiar position atop the Big 12 standings and the Cowboys still seeking consistency. It’s a rivalry game, of course, so anything can and probably will happen.

Oklahoma QB Kyler Murray overcame a couple early miscues to eventually lead his team past Texas Tech last time out. Another big game from RB Trey Sermon also helped, and WRs Marquise Brown and CeeDee Lamb provide constant scoring threats. But enough issues on the defensive side of the ball remain despite earlier coaching staff changes to have Sooners’ fans concerned on a weekly basis. Cowboys QB Taylor Cornelius has the weapons to keep up, most notably RB Justice Hill and WR Tylan Wallace, but OSU can’t afford many empty possessions. 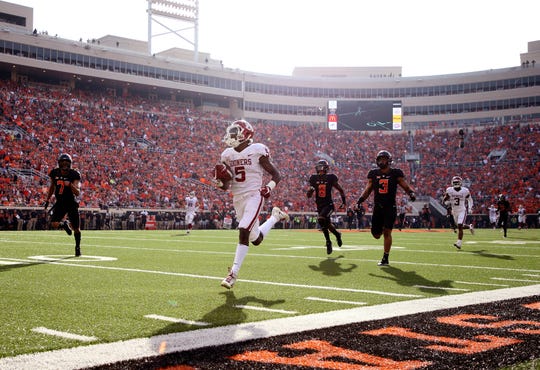 No. 15 Mississippi State at No. 1 Alabama

The Crimson Tide’s place in the SEC finale has been secured, and recent history has shown they don’t have to be undefeated to earn an invitation to the playoff. But the team’s commitment to coach Nick Saban’s process emphasizes taking nothing for granted. The Bulldogs, who are glad to have already achieved bowl eligibility, shouldn’t expect any reprieve in this visit to Tuscaloosa.

While Alabama QB Tua Tagovailoa threw his first interception of the season at LSU, he still passed for two touchdowns and ran for another despite continuing to play on a sore knee. But it was DT Quinnen Williams and the Tide defense that controlled matters from start to finish, just as SEC watchers have come to expect. Miss State QB Nick Fitzgerald can be more elusive, and he does have options downfield like WRs Osirus Mitchell and Stephen Guidry that can challenge the Tide secondary. But the Bulldogs can’t afford to be playing from behind; RB Najee Harris and the Alabama offensive line certainly know how to close with the lead.

Auburn at No. 5 Georgia

Georgia’s date with Alabama for the SEC title is also assured. Unlike the Crimson Tide, however, the Bulldogs already have a notch in the loss column and must avoid a second one before trying to win a return trip to the playoff. Auburn can only play spoiler at this point but got a needed comeback win against Texas A&M. The Tigers have now reached bowl eligibility heading into this nasty finishing stretch that will also take them to Tuscaloosa.

The Bulldogs’ rushing success against Kentucky’s excellent defense in the division-clinching win, with D’Andre Swift and Elijah Holyfield both eclipsing the century mark, was huge, especially on the heels of the unit’s struggles in the loss at LSU last month. Auburn has a solid ground defense as well, but Georgia QB Jake Fromm’s accuracy should help keep the running lanes open. While QB Jarrett Stidham managed to rescue the Tigers a week ago, the team still lacks the balance needed for coach Gus Malzahn’s offensive system to be most effective. Auburn WR Darius Slayton should become well acquainted with Bulldogs CB Deandre Baker.

The Mississippi State Bulldogs take on the Alabama Crimson Tide. Here are Reasons Why the University of Alabama is the Worst. It’s satire folks.
Mississippi State vs. Alabama odds, line: 2018 college football picks, predictions from model on 7-3 roll