Could Jalen Hurts be Tide’s starting QB in 2020? 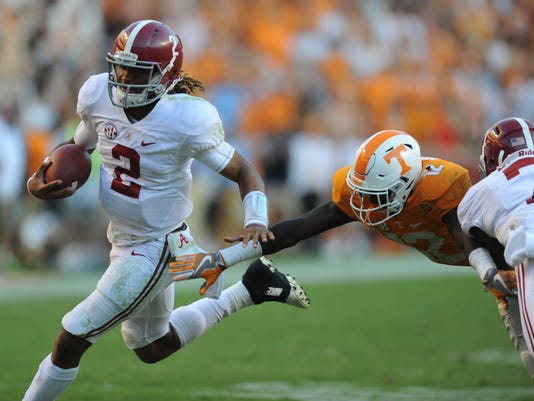 Alabama’s most significant pass against Missouri didn’t result in a touchdown. It didn’t even gain 10 yards.

Who caught it was more important than the yardage.

Jalen Hurts made the catch for a 7-yard gain. Alabama fans responded with a touchdown-like cheer.

Hurts is listed as a backup quarterback on the depth chart for Saturday’s game at Neyland Stadium against Tennessee. But he’s so much more than that.

Two years ago, he was the SEC Offensive Player of the Year as a freshman. He has a 26-2 record as Alabama’s starting quarterback.

He just has the misfortune of playing behind the best quarterback in the country – and Heisman Trophy favorite – Tua Tagovailoa.

SportsPulse: It was always this scary thought: What if Bama ever got an elite QB? Ever since Tua Tagovailoa took over the second half of the National Championship game that nightmare has become a reality for everyone else.
USA TODAY

Tagovailoa won the quarterback job in preseason. If he had been competing against some NFL quarterbacks, he still might have won the job. He’s that good.

Once Alabama’s starting quarterback had been determined, speculation turned to Hurts’ next move. Would he stay or transfer?

The speculation ended with another Alabama cheer. After Hurts played in his fifth game of the season, he no longer was eligible for a redshirt. Alabama then was assured of not only having the best quarterback, but the best backup quarterback as well.

Hurts still could leave Alabama after the season. If he did, he would be eligible to play somewhere else next season as a graduate transfer.

Plenty of schools would be interested, especially if their offense functions best with a running quarterback.

In the SEC, Mississippi State’s offense would match up well with Hurts’ skills. So would Auburn’s, Florida’s and Kentucky’s.

However, it’s not as though Hurts has to limit himself to the SEC. He could choose from all of college football.

Or he could stay at Alabama for another season.

Obvious question: Why would he do that?

He would forever endear himself to the Alabama fan base. He also could increase his career options.

Although Hurts has improved as a passer, it’s still questionable whether he could play quarterback at the NFL level.

But what if he used the next spring and the 2019 season to learn another position? He’s a terrific athlete – perhaps capable of playing wide receiver or even defensive back.

Another Jalen has fared well by switching positions. Jalen Hurd was an outstanding running back at Tennessee in 2016 before deciding to change a couple of things – his school and position. He transferred to Baylor, sat out a year and is now excelling as a wide receiver.

What if Tagovailoa would turn pro after the 2019 season? If Hurts played in only four games and redshirted next season, he could be Alabama’s starting quarterback in 2020.

John Adams is a senior columnist. He may be reached at 865-342-6284 or john.adams@knoxnews.com. Follow him at: twitter.com/johnadamskns.

Does Alabama have a more talented offense than the Bills?
Week eight key games for Crimson Tide fans