Rather than use metal screws to treat a patient with a syndesmosis joint injury, Arthrex’s TightRope procedure uses a flexible high strength suture.
Naples Daily News

It’s safe to say Crimson Tide fans let out a collective sigh of relief when quarterback Tua Tagovailoa returned to the football field to help Alabama beat the University of Oklahoma in the Capital One Orange Bowl on Dec. 29. Not even a month before, the college sophomore suffered a severe high ankle sprain at the SEC Championship in Atlanta on Dec. 1.

The same injury befell fellow college quarterback Jalen Hurts during an October game in Knoxville against University of Tennessee. Hurts, a junior, missed only a couple of games before he was back the following month.

Typically, it takes six to 12 weeks to recover from a high ankle sprain, according to orthopedic surgeon Dr. Lyle Cain. He, along with Dr. Norman Waldrop, operated on both University of Alabama athletes at Andrews Sports Medicine & Orthopaedic Center in Birmingham.

The surgeons cut recovery time in half by using a minimally invasive procedure developed, manufactured and marketed by Naples-based Arthrex.

A closer look at TightRope and what led to speedy recoveries

“The TightRope device has allowed us to fix this type of sprain in the short-term and rehabilitate these athletes and get them back safely and quicker on the field,” Cain said in an interview days before Alabama faces Clemson University in the 2019 National Championship Game on Monday night.

Both his patients are doing well after their outpatient procedures, he said. Hurts is fully recovered, while Tagovailoa is almost there.

TightRope works by using high strength suture, instead of traditional metal screws, to treat a patient with a syndesmosis joint injury. The suture is pushed and secured between two metallic buttons placed against the tibia and fibula at the ankle, with or without associated fractures, according to Peter Denove, senior director of distal extremities product management at Arthrex.

This procedure doesn’t fix a fracture, he added, but instead heals the soft tissues associated with a fracture or high ankle sprain.

Once the sutures are in place, they can provide a patient with more stability and shorter rehab time, and help them regain normal motion of the ankle. Unlike screws, sutures can stay in the body indefinitely without a chance of breaking. 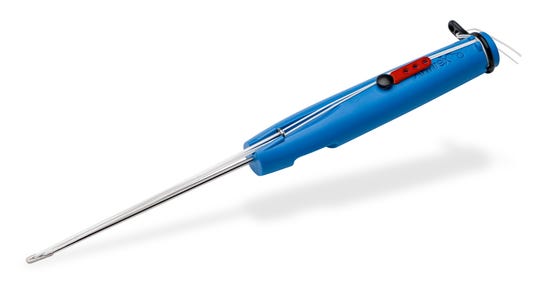 A high strength suture, instead of metal screws, is used to treat patients with a syndesmosis joint injury. The Syndesmosis TightRope Implant System, developed by Arthrex, led to the speedy recoveries of two Alabama quarterbacks late last year. (Photo: Submitted/Arthrex) 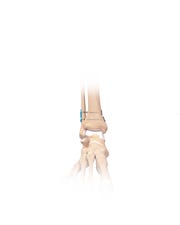 A high strength suture, instead of metal screws, is used to treat patients with a syndesmosis joint injury. The Syndesmosis TightRope Implant System, developed by Arthrex, led to the speedy recoveries of two Alabama quarterbacks late last year. (Photo: Submitted/Arthrex)

The procedure usually takes no more than an hour. Cain covers the incision with another Arthrex product called Jumpstart Antimicrobial wound dressing. It uses electrical current to assist with wound healing.

The TightRope system is far from new. In fact, it has been used in the U.S. since 2005.

TightRope was invented by Dr. Brian Thornes, an Irish surgeon who brought the product to Arthrex in 2002.

The road outside Arthrex’s main campus Wednesday, April 13, 2016, in North Naples. The Naples-based medical device manufacturing company offers a superb benefits package, a laid-back environment for its employees, even free lunch Monday through Thursdays, but is still having a difficult time filling the 250 vacancies the company is searching to fill. (Photo: Luke Franke/Naples Daily News)

It took Arthrex a couple of years to develop the product before making it available to the medical community, according to Denove, who developed the product alongside Karen Gallen, senior director of engineering at Arthrex.

One of the biggest challenges was and is getting old-school doctors onboard with the new form of treatment.

“The mentality of older surgeons is, ‘Two metal screws give the compression you need, who cares if the screws break,’ ” Denove said. “But I would prefer something that does the job and is flexible and lets the patient regain normal motion of the ankle.” 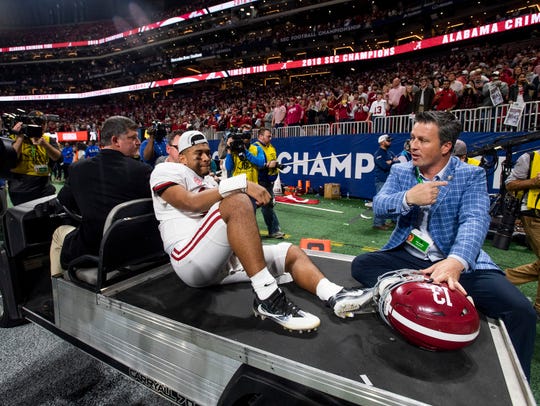 Injured Alabama quarterback Tua Tagovailoa (13) is carted off of the field after the Alabama win in the SEC Championship Game at Mercedes-Benz Stadium in Atlanta, Ga., on Saturday December 1, 2018. (Photo: Mickey Welsh)

Since its introduction, the TightRope system has been used 281,000 times in patients worldwide, including in Naples, according to a news release from Arthrex.

Media coverage of Tagovailoa and his ankle only garnered more attention for TightRope. The procedure was featured on ESPN’s SportsCenter, which documented the player’s road to recovery as he prepared for the Orange Bowl.

More: Arthrex moving along on its expansion project in North Naples

In an interview with ESPN, Tagovailoa also attributed his quick recovery to his mindset. 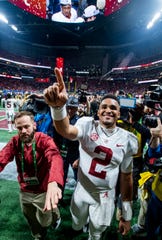 Alabama quarterback Jalen Hurts (2) signals No. 1 as he waves to his family after defeating Georgia in the SEC Championship Game at Mercedes Benz Stadium in Atlanta, Ga., on Saturday, December 1, 2018. (Photo: Mickey Welsh)