BIRMINGHAM, Ala. — While 12-year-old Quinnen Williams watched fireworks explode above him, the secret his mother kept was exposed in an emergency room of a nearby hospital. The cancer she’d beaten five years ago had returned, and Marquischa Henderson Williams hid it from everyone—until Fourth of July night in 2010, when the disease incapacitated her in such a way that her mother rushed her to the ER. “She went in that night,” Yvarta Henderson says, “and she never came back home.” Quinnen’s mother passed away five weeks later, succumbing to a disease she spent months fighting in obscurity, an ironic twist to a message she always told her children: Keep a smile on your face because you never know what someone’s going through.

More than eight years later, Quinnen has not overcome her death. He politely declines to discuss it, a deep hurt throbbing inside the 6’4″, 300-pound frame of Alabama’s starting nose guard. He won’t tell you he plays football to make her proud. He won’t tell you he scribbles her name on his wrist tape before each game. He won’t tell you he’s still deep in grief. But he’ll show you on Saturdays. He’ll use those violent hands to push aside double teams, spin off blocks to gobble up rushers, and move those quick feet to chase down quarterbacks.

Quinnen won’t tell you he uses football as an outlet for his tragedy, but he does. There is a quiet catalyst to his vicious sacks, all seven of them, and the team-high 16 tackles for loss, too. There is an impetus behind his meteoric rise from little-known reserve to top-10 draft prospect in the span of a few weeks. There is a deeper reason he’ll suit up Saturday in the top-ranked Crimson Tide’s SEC championship game against No. 4 Georgia. It is her, Marquischa Henderson Williams, a woman who he resembles, from his chubby cheeks to his big heart, from his dark brown eyes to his aspirations (he wants to, one day, be a school teacher like she was).

“We don’t talk about my mom passing so much,” says Quinnen’s brother Quincy. “We talk about the positive. We talk like she’s still alive.” Quincy is the oldest of four children Marquischa left behind, a “spokesman of the family,” he refers to himself, a mature kid who just completed a five-year career as a linebacker at Murray State. For Quinnen, he’s the rock. “Quinnen took it the hardest,” Quincy continues. “He was a momma’s boy, the one with the big heart. The only person he talks to, really, about it is me. When we do talk, I let him know every single time how proud she is looking down at us.”

Quinnen is no longer behind the scenes, as Alabama linebacker Christian Miller puts it. A bench-rider for the last two years, this redshirt sophomore is now a consistent presence behind the line of scrimmage, even calling his sacks on the sideline like Babe Ruth called homers in the box. “He tells us before he comes onto the field,” says quarterback Tua Tagovailoa. “‘I’m going to get two sacks this series.’ And he does it.” NFL scouts and opposing coaches have noticed. The guy is nearly averaging as many tackles a game (five) as he averaged snaps (seven) a year ago. “That kid couldn’t even get on the field last year,” one SEC assistant says. “You look up and nobody in the f—— country can block him.” ESPN analyst Todd McShay recently ranked him as the No. 6 prospect in the 2019 NFL draft, and Mel Kiper, earlier this month, suggested he could challenge Ohio State’s Nick Bosa and Houston’s Ed Oliver for the No. 1 overall pick.

STAPLES: How Kyler Murray Pushed Tua Tagovailoa Into One of the Best Two-Man Heisman Races Ever

What makes his rise so confounding: He only this year moved inside to nose guard from a career of playing defensive tackle or defensive end. He began training for the move last January, gaining about 20 pounds and poring over film of nose guards like Rams middle man Aaron Donald and ex-Alabama noses Da’Ron Payne, A’Shawn Robinson, Jarran Reed and Marcell Dareus. He remembers stuffing his belly with so much food—he ate steak at least once a day—that he felt sick. It all seems worth it now for the defensive leader of the 12–0 Tide and a finalist for the Outland Trophy, which is awarded to the nation’s best lineman.

This is a season in which even he himself didn’t see coming. “I ain’t know I’d even get on the field!” he says. Quinnen reflects on the hurdles he’s crossed over the last 10 months to reach this point. He puts aside a bag of potato chips, leans back against a chair and smiles. “A lot of football players come into college and don’t play their freshman year and it just destroys them and they don’t get back to that person they came in at,” he says. “There’s a lot of stuff I look at, like, how did I make it to this moment?” 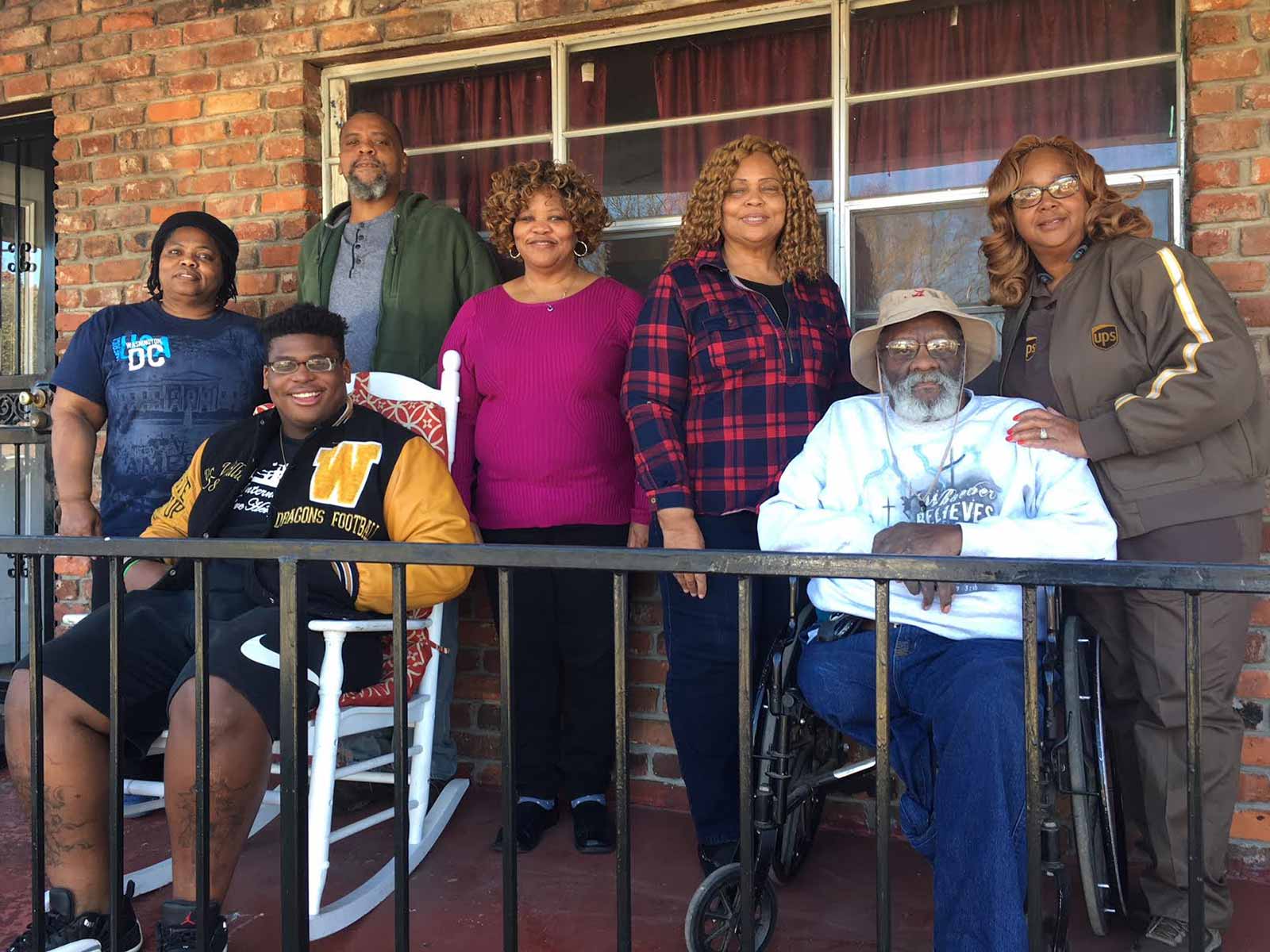 That story begins well before his arrival to Tuscaloosa. It began right here, in his grandmother’s quaint home in southwest Birmingham. Yvarta Henderson and her 11 siblings were raised in this same neighborhood, East Brownville, a hodgepodge of modest homes like Yvarta’s, mixed with abandon lots and cratered houses. The background noise here is a persistent low hum, the result of three separate railroad tracks crisscrossing the area. Inside Yvarta’s home are reminders of the struggles this family has faced. A portrait of Marquischa is positioned prominently in the small living room, and her face is on an afghan draped over a recliner. Yvarta gestures to a chair at a circular dining room table. “She used to sit right there and do her work,” Yvarta says, “her and her laptop.” Marquischa, a school teacher, was in master’s degree courses at the online-based University of Phoenix.

Marquischa battled her illness in secret while still teaching her first-grade classes, juggling those master’s courses and learning new cooking creations while watching her favorite channel, the Food Network, often times with little Quinnen. “She didn’t say anything about the cancer,” Yvarta says. The family believes Marquischa, then 37, didn’t want to burden the household even more—her father, Charles, was already sick. Charles Henderson is wheelchair-bound now after doctors had to amputate his right leg following a brain aneurysm and multiple seizures. On a sunny but cold Wednesday morning, Charles sits quietly in his wheelchair staring out of the family’s open front door. He’s within earshot of the conversation about his deceased daughter. “A good woman,” a choked up Charles interrupts.

Quincy says he and his siblings “blamed God” for their mother’s death at first. Quinnen closed out everybody, and he’s still somewhat shy to this day. Their grandfather got the children out of the funk, turned them to prayer and delivered to them a message: Prove you’ve been listening to your mom this whole life. “Her biggest thing was school and sports,” Quincy says. “Sports was our way of escaping the reality of my mom passing.” Quincy turned into an elite swimmer before switching only to football, joining younger brothers Quinnen and Giovanni. The trio rose up the ranks at Wenonah High, finding themselves on the field at the same time during Quincy’s senior year: Quincy playing linebacker, Giovanni at defensive end and Quinnen at defensive tackle. Fans referred to it as the “Williams Zone,” says Henry Pope, the Wenonah defensive coordinator. “You were not running on that defense.”

The three brothers are close, as is the baby of the family, Ciele, a senior cheerleader at Wenonah. They bonded after their mother’s death in a way that’s tough to understand. Quincy tries: “We think about ourselves as a body, four of us, four parts: I’m the one with the plan, Quinnen is the one with the emotions and our other brother and sisters are our eyes.” The four share a text group that is notorious in the family. No one else is allowed, especially not Grandma, laughs Giovanni, who now attends a Birmingham-area junior college.

Giovanni hopes to continue his football career like his brothers, but he doesn’t share their love for shoes: Quincy and Quinnen own more than 200 pairs of tennis shoes. “We’re sneakerheads,” laughs Quincy. Quinnen has so many shoes he often doles them out to Alabama teammates, with the faint hope that they might be returned one day. Quinnen is the soft-spoken, shy one of the group, with a not-so-subtle nickname: Big Baby. He’s a peculiar kid. He still refers to his grandmother as “Mrs. Henderson” from his days at the same school in which she taught. On the field, he helps opponents off the ground after he puts them there, and he holds this unusual guilty feeling of having to get a sack each time the offense scores a touchdown. “I just feel like I owe Tua something,” Quinnen explains. He uses that for motivation. He does the same with those two seasons as a reserve. Quinnen won’t tell you, but Quincy will: He heard people were doubting him. “He told me when he got his shot, he’s going to stay in the spotlight,” Quincy says.

And here he is now, a projected top-10 selection in the 2019 NFL draft if he leaves after his redshirt sophomore season. The No. 11 selection in this past year’s draft signed a contract worth $16.4 million with a $10 million signing bonus. “If he wants to stay another year, that’s his prerogative,” says Ivy Allen, one of Quinnen’s three aunts gathered at Yvarta’s home Wednesday. Quinnen’s family members say they haven’t looked at the draft projections. Quinnen himself admits he has. “I see the top-fives and stuff,” he says. “I have goals for this team.”

His team might be one of the best in college football history. The Crimson Tide have opened the season with 12 consecutive victories by 20 points or more—the only other time that’s been done in NCAA history was by Yale in 1888. Most recently Alabama dispatched rival Auburn by 31 points, a rather emotional game for Quinnen. Not only was he at one point committed to Auburn, but his mother was a big Auburn fan. Quinnen won’t tell you that, just like he won’t tell you about his mom’s feta cheese pasta or those freshly baked chocolate chip cookies. He won’t tell you about how she used to play third base during family softball games or how she’d sit in her car, illness and all, while her sons threw the football at the park. “He hasn’t grieved like he wants to, at least not in front of everybody,” Allen says. “It has to happen. It will.” In a way, it happens each Saturday in the fall, when big No. 92 unleashes onto his opponents whatever’s bottled up inside.