SportsPulse: From Nick Saban to Dabo Swinney, here are the best soundbites from the National Championship media day.
USA TODAY 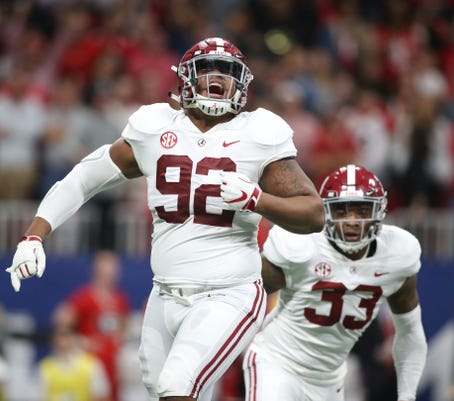 SAN JOSE, Calif. — Much of what has happened this season in college football could have been predicted a year ago, down to the fact that Clemson and Alabama will play Monday night for the national title.

Within that inevitability, however, it would have been controversial to say that Alabama would have the the game’s most highly-regarded defensive lineman and even more unthinkable that it would be Quinnen Williams. Until this season, in fact, the only proper response to that kind of prediction would be: “Who’s Quinnen Williams?”

Now, there’s an answer to that question. Buried on the depth chart his first two years at Alabama, Williams is a singularly disruptive force who could make life miserable Monday for Clemson quarterback Trevor Lawrence, an Outland Trophy winner as the nation’s best interior lineman and potentially the No. 1 overall pick in an NFL draft that projects to be historically deep at his position.

“I definitely didn’t know I would be on this stage I am now. I feel like, it just happened,” Williams said. “I didn’t know it would be all this.”

Even though the Alabama system is built for blue-chip recruits to disappear on the scout team and then re-emerge as stars by their second or third year, it’s almost unheard of to go from non-factor to best in the country as quickly as Williams has. Especially in a year that began with Houston sending out promotional bobbleheads for Ed Oliver, Sports Illustrated putting Clemson’s defensive line on the cover of its college football preview issue and players like Ohio State’s Nick Bosa generating early Heisman Trophy buzz.

In fact, ESPN’s Todd McShay currently projects 14 defensive linemen in the first round of the NFLdraft, an unheard of talent haul that could re-shape the line of scrimmage across the league. For Williams to bypass practically all of them off just one meaningful season of college football (McShay ranks him the No. 2 prospect behind Bosa) is hard to conceive even for the Alabama machine, which has produced plenty of elite defensive linemen under Nick Saban but only one (Marcell Dareus) drafted in the top 10.

“With Daron (Payne) as well as Jonathan Allen from a production standpoint, ‘Q’ is right there with those guys as far as how disruptive he’s been,” defensive coordinator Tosh Lupoi said.

So how did it happen? How did someone who redshirted as a freshman and was largely lost in the shuffle as a sophomore come back in his third year and become unblockable in the SEC?

It started with a position change this past offseason, sliding Williams from defensive end to the nose guard position in the middle of Saban’s defense.

It was, essentially, the move Williams had to make if he wanted to get on the field, and it required him to eat his way over 300 pounds after arriving at Alabama as a sleek 260-pound edge rusher who relied on quickness.

And still, there was no guarantee for Williams that he would be a significant contributor, much less a star, on a defense that needed to reset its personnel after losing significant players to the NFL off last year’s title team.

Though Williams’ speed remained, helping him wreck offensive lines throughout the SEC, his ability to use his hands set him apart and allowed him to slip off blocks and wreck double-teams. In fact, as the season went along, he only seemed to get better as teams game-planned to neutralize him.

You can make an argument no defensive player in college football had a better single game than Williams did at LSU on Nov. 3, accounting for seven solo tackles (10 total) and 2 1/2 sacks. He then proceeded to record a sack in four straight games to end the regular season, finishing with 18 tackles for loss.

Before his breakout this year, it would have been easy for Williams to question whether he was on the right path. A self-described Auburn fan growing up in Birmingham, he committed to Gus Malzahn as soon as he got offered a scholarship but then flipped to Alabama, a decision that was going to make him a hero to half the people who grew up around him and a villain to the other half.

“I wanted to be a Tiger since Cam Newton, Bo Jackson, all that,” Williams said. “People had to tell me, ‘Bro you’re making this decision as a fan and not as a business decision. Then I started taking my recruitment serious as a business decision and where I want to be in the future. I came to Alabama and fell in love with it. The thing that really stood out to me was the different guys who’d come back who were in the NFL already, Dont’a Hightower, Courtney Upshaw, Eddie Lacy. You see a new face every day you come back and it was amazing to me to see that, like, ‘I play with you guys on Madden.’”

Now, Williams is poised to be in their shoes in a few months should he declare for the draft. Though he didn’t commit one way or the other Saturday, it would be almost inconceivable for him to return to Alabama with his professional stock soaring.

What he did acknowledge is that even in the most optimistic scenario for him this season, he never considered that going into the draft would be an option, much less as a possible No. 1 pick.

Monday night, he’ll have one more chance this season to show why he deserves it.