The Alabama football defense is not a vintage in the sense it allows more yards and more points than in the past. However, given the limited depth, the 2018 squad’s trench is playing way above its head.

There is an argument to be made the Alabama football first-team defensive line is the best in the country right now. To this point, the Big Three (Quinnen Williams, Isaiah Buggs and Raekwon Davis) have accounted for 87 tackles, 20.5 tackles for loss and 10.5 of the team’s 26 sacks so far.

All three are playing pivotal roles in not only getting into the offensive backfield themselves but allowing the linebackers and defensive backs room to disrupt, as well. Whereas Raekwon (“The Chef”) was the team’s sack leader last year, Isaiah seems to have taken that mantle in 2018. With 8.5 sacks through 8 games, he’s currently on track to record at least 12 by regular season’s end.

Raekwon, whose production is down from 2017, is in the unenviable position of having to eat multiple blocks to free up guys like Mack Wilson and Dylan Moses. It’s not the sexiest job in the world, but it’s his play from last season that causes coaching staffs to game plan around him. They know how important No. 99 is. 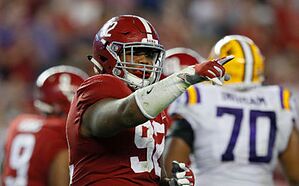 Then there’s Quinnen. People close to the program knew that Quinnen Williams was about to break out, but the college football world is now more than aware of his considerable skills eight games into the 2018 season.

In 2017, future first rounder Jonathan Allen knew Williams had talent. Williams redshirted in 2016 (Allen’s last season) and Allen made it his mission to teach him everything he knew.

This scouting report of Williams and Houston DT Ed Oliver gives a detailed account of how effective the Alabama football DT has been this season. His technique doesn’t look like that of a redshirt sophomore. To this point, save for maybe Deionte Thompson, Williams is the MVP of the Tide defense.

The major point brought up by numerous pundits heading into 2018 was the defensive line depth was nowhere near what it had been the past three years. To that I say, “No s***, Sherlock.” In 2015, Bret Bielema called the Alabama football defensive line unit the best he’s ever seen. That unit had A’Shawn Robinson, Jonathan Allen, Jarran Reed, Dalvin Tomlinson, Da’Shawn Hand and Da’Ron Payne.

Each subsequent season has seen those numbers dwindle as the last of that generational squad left after 2017. It’s what makes this particular unit so special. Everyone knew about Davis, but the fact that Buggs has become the team’s sack leader this season and Williams is one of the top pro-ready prospects at any position in college football, shows that the “next guys in line” were plenty ready.

Three of the current Tide D-line are NFL ready

The only unfortunate aspect of the emergence of Williams is that given his three years in the program, he, along with Buggs and, most likely, Davis will all be departing by season’s end. The pundits might’ve been right about the depth issues upfront, but they can’t say the first three guys aren’t playing at an elite level.

Yes, if one of them goes down, it may spell trouble. But the special thing about a lack of depth going into a new season, especially in personnel-heavy defense like Saban’s, means a whole new second line gets to play meaningful snaps. Most likely, Bama Nation will be hearing about LaBryan Ray, Phil Mathis and Stephon Wynn this time next year.

Next: UCF AD is Tone-Deaf

Is there danger ahead for a still not deep, defensive line? Maybe so, but maybe not, as long as the Big Three stay healthy.