What are the odds: Championship Weekend 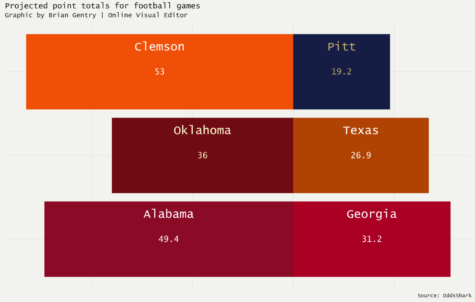 Hopefully everyone had a relaxing Thanksgiving break filled with food and football. Two weeks ago, I went 3-3 in my picks, bringing my season betting record to a solid 32-28.

Since we last gambled, Pitt football clinched its berth in the ACC Championship game against No. 2 undefeated Clemson. The Panthers then sleepwalked through their game against Miami, losing 24-3.

The loss didn’t affect Pitt’s path to the ACC Championship, but it obviously gives them zero momentum heading into one of the biggest weekends of college football.

This weekend is commonly known as “Championship Weekend” due to all of the conference championship games going on in college football. The Red River Rivalry gets an uncommon second game in one season, as No. 14 Texas takes on No. 5 Oklahoma in the Big 12 Championship.

Undefeated No. 1 Alabama will take on No. 4 Georgia in the SEC Championship game with potentially two spots to the College Football Playoff on the line. If Georgia can pull off the upset, it’s highly likely both teams will get in the playoff.

Analysis: Oh, Pat Narduzzi, you get people so excited and then the team goes out and plays like garbage against an average Miami team. The Panthers looked lifeless during their 24-3 loss. Pitt was averaging 40.75 points per game during its four-game win streak before its loss to the Hurricanes. The offense played extremely conservative and it showed in the box score — Pitt only had 200 total yards of offense, unusual for a team averaging 386.1 yards per game. Maybe Narduzzi has a secret playbook for the Clemson game and didn’t want to show any of it during the Miami game. Pitt is one of only a few teams to beat Clemson in the past four years during their run of dominance, and that was a 43-42 game in 2016. If Pitt pulls off a historic upset, expect the score to look similar.

Despite most of the current Clemson football team still being in high school when the Tigers lost to Pitt in 2016, head coach Dabo Swinney remembers it well.

“They just came in here and outplayed us in that game,” Swinney said. “We couldn’t really stop them. We were very fortunate, because if I remember correctly it seemed like everybody lost on that day. Had that not happened, we might’ve been out of the playoffs.” He continued to say, “Our seniors, their only home loss of their career was Pitt, so they’re excited to have a chance to play Pitt in their last ACC game.”

It looks like he won’t need to motivate the team much, perhaps just show replays of the 2016 Pitt game throughout the locker room all week. The Tigers defense has been one of the best in the country all season, holding opponents to only 84.8 rushing yards per game. Pitt is known to rely heavily on the run game and if Clemson can stop them early it could be a long day in Charlotte for the Panthers.

Bet: Take Pitt to cover the huge spread and bet the over.

Analysis: A rematch of the Red River Rivalry usually doesn’t happen until the following season, but Longhorn and Sooner fans are excited to see the game for a second time this year. But there is much more on the line in this week’s matchup. Oklahoma could win its way into the College Football Playoffs, while Texas would love nothing more than to play the role of spoiler. Oklahoma quarterback and redshirt junior Kyler Murray will look to continue his dominant season. The Heisman Trophy front runner has thrown for 3,674 yards and 37 touchdowns this  year, and his arm isn’t his only weapon. The young star has run for 853 yards. His athleticism is always on display and it may be enough for Murray to beat Texas on his own.

The Longhorns got their best win of the season when they beat Oklahoma 48-45 in October. However, a lot has changed for Texas since then. Back-to-back losses against rival Oklahoma State and a ranked West Virginia team was a low point in the season. The Longhorns have bounced back to win three games in a row, including a 24-10 win over No. 16 Iowa State. Sophomore phenom quarterback Sam Ehlinger has been solid all season, throwing for 2,774 yards, 23 touchdowns and only four interceptions. If he can lead the offense and keep up with Oklahoma in scoring, the Longhorns could have bragging rights for years to come.

Bet: Texas will cover the spread and bet on the over.

Analysis: Another year and another SEC Championship game appearance for head coach Nick Saban and his Alabama Crimson Tide. This time, it’s a rematch of last year’s National Championship Game against the Georgia Bulldogs. Last year’s game ended in a dramatic fashion, when then first-year quarterback Tua Tagovailoa came off the bench and threw a 41-yard touchdown in overtime to win the title for Alabama. Eleven months later and Tagovailoa is now a favorite to win the Heisman Trophy and lead Alabama back to the National Championship.

The Georgia Bulldogs may still have nightmares of that play, but sophomore quarterback Jake Fromm has been just as successful for Georgia as Tagovailoa has been for Alabama. He has thrown for 2,236 yards this season and has an unbelievable passer rating of 179.4. Fromm is ready to show off his skills in front of all the NFL scouts in the building. If he can get the offense rolling early and keep their foot on the pedal, an upset and College Football Playoff appearance are in Georgia’s sights.

Bet: Alabama always covers and take the over.