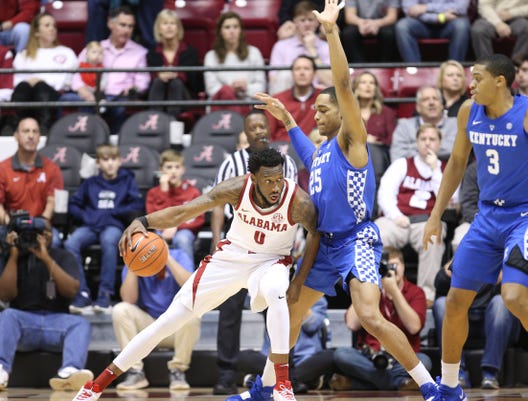 TUSCALOOSA, Ala. – Despite facing a hot shooter and a steadfast defensive effort from the opposition, there was still a chance for Tyler Herro.

The last gasp and prayer of the freshman guard fell short as time expired leaving the No. 14 Kentucky Wildcats with a 77-75 loss to the Alabama Crimson Tide on Saturday at Coleman Coliseum.

“The biggest thing is the start of the second half, I was just so disappointed,” head coach John Calipari said. “Had to sub two guys a minute and a half into the second half. What was your warmup? What did you do? Why weren’t you ready for a dogfight? You had to play the first half and know what this game is.”

More coverage: Why Kentucky basketball’s EJ Montgomery is still looking for his role

Kentucky (10-3, 0-1) fell behind early but regained the lead with a little more than 10 minutes left in the first half. There were five lead changes and nine ties in the first 20 minutes, but Kentucky held a two-point lead at the break with graduate transfer Reid Travis leading the Wildcat offense with 10 points.

Alabama began the second half on an 8-0 run, but the Wildcats quickly retook the lead before allowing a long run from the Crimson Tide that saw them take a 61-53 lead with 7:55 remaining in the game.

The Crimson Tide eventually pushed its lead to 11 points with 3:11 to play in the game, and that’s when PJ Washington took over.

The sophomore forward scored nine of his 15 points in the second half and led a charge that saw Kentucky battle back to within a single point on a 17-9 run with four seconds remaining. A foul on Alabama’s John Petty sent the sophomore guard to the line where he extended the Crimson Tide lead to two points after hitting the second of two free-throws.

“We just got to play like that for all 40 minutes,” Washington said. “We just got to know the game plan and know we’re in on both sides of the floor and just be aggressive.”

Kentucky finished the day shooting 43 percent from the field and getting outrebounded by the Crimson Tide, 40-32, despite forcing 17 turnovers and holding Alabama to 25 percent from three-point range in the second half.

Five Wildcats finished in double-figures with Washington leading the way followed by Keldon Johnson, who had 13 points, seven rebounds and four assists. Travis, Hagans and Herro each had 12 points and combined for 12 rebounds and seven assists.

Kentucky faced a more experienced Alabama team than the one they destroyed in the 2018 SEC Basketball Tournament but were in a position to win in the end. A lesson that Calipari hopes his team learns before taking on Texas A&M this week.

“I got to give Alabama credit,” Calipari said. “Avery’s (Johnson) done a great job. These guys played their butts off and fought and did whatever they had to to win and celebrated and all the good stuff. We’ll go lick our wounds and get on to a game we got to play on Tuesday.”